When you are on an eating disorder unit, the food aspect of things/what you can and cannot do with food, is a lot more regimented and controlled by sets of rules than it is in normal life.
Rules will vary depending on what hospital ward or inpatient unit you have been admitted to, but as a general list of examples these rules will be things like “no eating cereal with tea spoons”, “no breaking food up into tiny pieces”, “no sleeves at the dinner table”, “you must scrape the plate that you are eating from clean to complete the meal”, “only X number of minutes to eat your meal” and “no inserting parsnips into the nostrils of the person sitting next to you” (pretty sure that last one is also relevant in real life actually but I am not quite sure…my mother was never very clear when it came to table manners.)
These rules are often frustrating and can seem a bit harsh but they exist because often an eating disorder controls how a person eats and behaves around food, as well as how much or little of it they eat, so part of treatment during recovery involves tackling those food behaviours as well as things like the amount of food someone might be eating. Like I said it can be annoying, but it makes sense. Take the “you must scrape your plate to complete a meal” thing. It may seem over the top (and is a rule that will destroy the lovely willow pattern adorning all of your best crockery), but were it not for rules like that in hospital, there is the risk of people arguing that they have finished their meal when really all they have done is smear it across the good china.

With behaviours like that, I think it is easy to tell the difference between them and genuine food preferences as I don’t think I know any people without eating disorders who “prefer” trying to mash a lasagne into oblivion rather than consuming it.
There are however, a lot of actions people do where it is far harder to tell if the person is making a genuine choice or following a behaviour, and in these situations it is less like trying to distinguish an elephant from a letter box, and more like trying to tell the difference between an elephant, a tea pot and a vacuum cleaner (if you line all three up together you have to admit they do look rather similar…trunks, nozzles and spouts are easily confused…I learnt that the hard way…and broke a teapot).

For example at the hospital I am in at the moment, there are certain rules regarding condiments such as “only two pepper/ketchup/vinegar/mayonnaise/brown sauce etc sachets per meal”. The logic behind this is that some people with eating disorders tend to totally cover their food with a certain condiment in order to make it all taste the same/spoil the food and make it taste horrible as a punishment etc.
Then again, as well as people who use pepper to burn the roof of their mouths off by using it excessively, there are people who use what looks like an excessive amount of pepper simply because they like it. Every time my Dad eats a meal he uses so much pepper that even people scuba diving at the bottom of the Atlantic start sneezing because he likes the spice, and I have a friend who uses what may look like a lot of salt because she has been brought up using that amount and things taste wrong without it. Neither of these people have eating disorders, but they would still struggle living by the rules that are in place to help someone in recovery from a disorder. I guess you could say that the way you tell the difference is to see which came first, the food preference or the disorder, but that isn’t as easy as it sounds. Eating disorders are sneaky, they slip into your life gradually without you really noticing, so it is rare for someone to be able to pin point the day they officially became unwell.

What if my Dad, who currently does not have an eating disorder, developed one in years to come and had to go into hospital? Or my friend who likes a lot of salt? They might, quite rightly, argue that their preferences existed years before their illnesses began and they may be right but the thing is, in hospital, that doesn’t really matter and this is where it gets frustrating. Once you are tarnished with the Eating Disorder brush, suddenly people assume that EVERYTHING you do around food is because of that disorder and they rarely give in or believe you even when you are expressing a genuine dislike. It can be really annoying when you know that your love of toast that is not particularly well cooked is because you like soft as opposed to crisp bread, yet when you are consistently told that everything you do is disordered, sometimes you can start to doubt and be unable to tell the difference between your own choices yourself (aka the is it an elephant, teapot or a vacuum cleaner situation).

How about timings and things like time limits on eating disorder wards? Admittedly they are necessary to avoid still working on Monday’s bowl of cereal at Sunday dinner time (rather soggy cereal I would imagine), but in addition to timings perhaps being affected by disordered thoughts or behaviours, people naturally have varying eating speeds. I certainly know that in my household my Dad will always finish his dinner a good 10-15 minutes before my mum for the simple reason that he has a bigger mouth and more violent set of gnashers (not abnormally large I might add…like he is still a handsome chap and isn’t frequently being mistaken for a shark who needs to be sent back to the aquarium…just clarifying…love you Dad.)

The main rule/“behaviour” that got me thinking about this topic however, the rule I have seen come up in every single one of my admissions to an eating disorder unit and the rule that is carved in a stone tablet and worshipped on a mountain guarded by holy cherubim:

“Thou shalt not dunk biscuits”.

Some of you reading this, who have never heard of such a rule, may be a little shocked, stunned and perhaps distressed to hear that there are people all over the country being forced to eat rich teas that have never actually taken a dip in a real mug of the beverage after which they are named (I know, it is upsetting but we can get through it).
Again, as with all hospital rules there is a reason behind it, that being that people sometimes submerge and drown their biscuits rather than dabbling in a quick dunk and then smear the soggy remains around the inside of their mugs or leave them in sorrowful abandoned mush mountains at the very bottom.

The issue though, comes when you are someone who wants to safely and appropriately dunk their biscuit, yet are prevented by the rule that may not be relevant to you. Of course rules have to apply to everyone on the ward to make them fair, but that is what is annoying, i.e. having an eating disorder and then having EVERYTHING you do with food put down to your disorder when maybe you have just grown up liking a lot of ketchup on your curly fries, or genuinely prefer the texture of a cookie that has had a quick swim in a mug of hot chocolate. Dunking biscuits CAN be a disordered behaviour, but it isn’t always.

Just imagine if the world had to live by eating disorder ward rules with the act of dunking a biscuit being classed as a disordered/unhealthy behaviour and thus banned for all. How would any of us ever eat an Oreo? The dunking aspect to those delights is even in the damn advert! They literally explain how to eat them on the packet! First you twist it, then you lick it, then YOU DUNK IT. If that bit was deleted from the process the country would grind to a halt and living rooms across the world would be filled with poor distressed people holding opened licked Oreos and crying out in agony “WHERE DO I GO FROM HERE?” Think of the number of teeth that would be broken on undunked ginger nuts!

You could maybe be a generous dictator and say that only people who appropriately dunk their biscuits are permitted to do so (something I have asked for on multiple previous admissions), but how can you tell if someone is dunking appropriately? What if someone is genuinely dunking for the resulting soggy biscuit end goal but is such a poor judge of the strength of their chosen biscuit that they get the timings wrong and remove their Custard cream or Bourbon from their brew not to find a perfectly melted vanilla or chocolate cream centre but instead a blank space, an empty half in which biscuit perfection had existed seconds before it was too late and the perfection turned into a sinking disappointment of heartbreak, sorrow and missed opportunities.
Should biscuit dunking be classed as an eating disorder behaviour just because it can sometimes be used as one or can it just be a preference?

Overall then it is clearly very difficult to tell the difference between an eating disorder behaviour and a genuine food preference, especially when you yourself have the eating disorder. I guess when it comes to people who have no issues with food the answer is obvious…until that person is unfortunate enough to develop the disorder and we are caught in the whole confusing “which came first the soggy biscuit or the mental health problem?” dilemma which has plagued scientists for years (scientists who I feel are doing valuable work but are also perhaps taking advantage of their right to order in free biscuits from the big companies under the guise of “research purposes”….)
Of course there will always be ways to figure out the disordered act from the genuine preference but it isn’t always as clear cut as the elephant and the letter box example and sometimes even knowing your own reasons for doing things can get you into a confused muddle of soggy biscuit yourself. 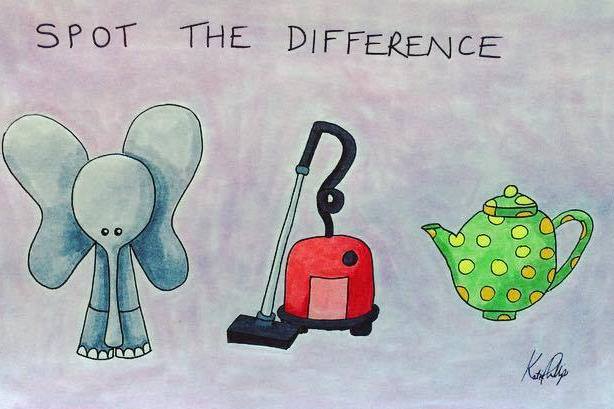