Recently, my psychiatrist prescribed me a new medication to help me with some of my mental health problems. I am on various medications already with a variety of different purposes and have been for some time, but in terms of what these new tablets are “supposed to do”, the aim is for them to reduce some more of the anxiety that my current medications are allowing to linger long after they have done their jobs. Ironically though, despite having had this packet of anti anxiety medication on the kitchen worktop for over a month, I am too anxious to take them.

I think being scared of taking medication for a mental health problem is extremely common and to be fair it would be weird if people weren’t a little afraid of whatever tablet their doctor has recommended them to take. A big reason for this is of course the long list of side effects that comes in any box of medication from Calpol to Morphine, although when you think about it there are no medications that have side effects, there are only effects.
Tablets do a lot of different things and it is the scientists/elves (I am not sure who makes medicine these days but I am sure it is one of the two) who decide which effects to put in the “Purpose of tablet” column and which go in the “side effects” column, aka the effects that are harder to advertise. For example, for some people Paracetamol can have the effect of giving them yellow skin so that effect is categorised as a side effect because that effect is less easy to advertise than the more attractive “this will help take your head ache away” effect (unless of course you are dealing with someone who wants yellow skin so that they can look like a Simpson, in which case I suggest body paint which is probably a lot safer).

I think mental health medication is scarier to take than “normal” body medication though, because there is a fear that it will fundamentally change you as a person, your characteristics, interests and identity. When you take a physical medication that may turn your skin the colour of a freshly picked banana, there is a separation there between you and the skin. Ok the skin is your skin, but aside from holding all your body parts together your skin doesn’t affect who YOU are and no matter what the colour of your skin, you will be the same person you were before and will be able to react and interact with friends and family in the same way as you did prior to your sudden transformation into a Simpson. The skin is just the irrelevant wrapping paper on the more important gift. If you wrap a new video game in white paper and then colour it yellow, you will still have the same present inside.
With mental health medications however, they are designed to interfere with how your brain works and the side effects of that can feel more personal. By changing your mind, it feels that they are changing an integral part of you, so that one second you could be a lover of Julie Andrews dancing round your kitchen belting out “the hills are alive” and the next you are on some uncontrollable rampage to burn every copy of the Sound of Music and Mary Poppins
I think we can all agree it is infinitely less stressful to take a tablet that might change the colour of our wrapping paper rather than one that risks turning the games console under the Christmas tree you have been waiting months for, into a sardine which in comparison is about as much fun as…well…a soggy sardine.

Indeed, I know from experience that medications can change fundamental parts of my personality. When I was a teenager there was one medication that practically turned me into the incredible hulk. I was filled with rage all the time, a rage without reason, and I became violent and out of control. I am really ashamed of a lot of things I did during that time of constant fury, as it changed my character so dramatically that I ended up doing a lot of things I wouldn’t normally do like kicking through a glass door.
As well as medications that have changed my character, I have experienced medications that have simply had mental side effects that were unpleasant such as one tablet that pretty much knocked me out and left me sleeping twenty four hours a day. I guess it did its job of reducing the number of OCD rituals I was carrying out, but that was only because I was a comatose zombie who could barely lift a duvet let alone shower for several hours.
I have also been on a medication that gave me hallucinations (if the police are reading this I would like to make it clear that these tablets were prescribed to me by a medical professional and were not in any way purchased in a dark alley from someone in a rather large coat). This was yet another unpleasant side effect, and every day I found it even harder to tell the difference between what was real and what wasn’t, what had happened in reality, and what was just a figment of my imagination. Luckily, during this time I was in hospital so there were nurses around constantly to help me distinguish between the two or sit with me through the scary ones, and though a lot of that time is a blur, looking back I find it easier to separate events that actually happened during that time from the more fantastical fictions written by my dodgy brain chemistry, based on what things are most likely to be true. For example nowadays I reason that it was most likely a hallucination when one of the nurses danced around my bed waving an assortment of Hawaiian shirts but obviously real life when I was awarded the Nobel prize for literature and rode around the country on an ostrich…I just wish I could find the prize money…and the ostrich…

It is also scary to take a mental health medication because the same medication can affect two people in completely different ways so it is impossible to hear of someone else’s experience with a particular tablet and know what to expect when you swallow it yourself, so you sort of go into it blind like some medication Russian roulette. Will you continue dancing around the kitchen singing “supercalifragilisticexpialidocious” or will you wake up next day to a smouldering pile of ashes in which you can vaguely make out the image of Julie Andrews dressed as a nun.
Indeed I have friends who have taken the same tablets as I have but with completely different results, and the medication that turned me into the Incredible Hulk (a medication I was swiftly removed from), is the same medication as the one that my friend has been taking for years because for her, the effect is far more calming than the urge to kick through the conservatory door.

With this medication I have been prescribed most recently though, the fear I have isn’t actually one that is related to the fear that it will change my brain chemistry and me as a person. To be honest things are so difficult at the moment that I wouldn’t give a curtain wrapped Von Trapp child if the medication changed me as a person (please forgive me Julie Andrews).
No, this time, the fear is more about the physical side effects listed in the instruction manual, most specifically the one that says “possible weight gain”. I know that whenever medications put this as a side effect it generally means that the tablets may increase a person’s appetite, consequently leading them to eat more food and gain weight because of that, rather than directly from the medication itself, so as someone with an eating disorder who eats the exact same rigid meal plan and amount every day without taking heed of hunger cues, that reason for weight gain would not happen to me. However again, as someone with an eating disorder, the fear of risking a random weight increase because of a tablet, even if I don’t change my diet, is terrifying. If that were to happen I would feel totally out of control, more anxious and likely to restrict my diet more than I already do. It is a difficult thing to balance, on one hand I could take this new medication and it could help me with anxiety, and on the other it could simply make things worse.

I know that medication is not always the answer, neither does it solve all your problems (a topic I really want to come back to sometime if you are willing to stick around as a reader of my blog…I will give you cookies…), but right now I do think that I need to give this medication a go considering the fact my brain isn’t responding to any of the other therapies/attempts to sort it out. In a few weeks time my psychiatrist will ask me how the new medication I have been taking for the past few months is going and at the moment I will have nothing to tell him because all I have done is look at it and I can wholeheartedly confirm that staring at the tablet has had no therapeutic benefit to me whatsoever. I really am determined to try it…at some point…possibly…definitely…I think…It is just the case of taking the first one and getting over that hurdle, cracking out a pot of maple syrup – going with the grand advice that a spoonful of sugar will make the medicine go down and not my weight go up…Good lord, where is Mary Poppins when you need her eh? 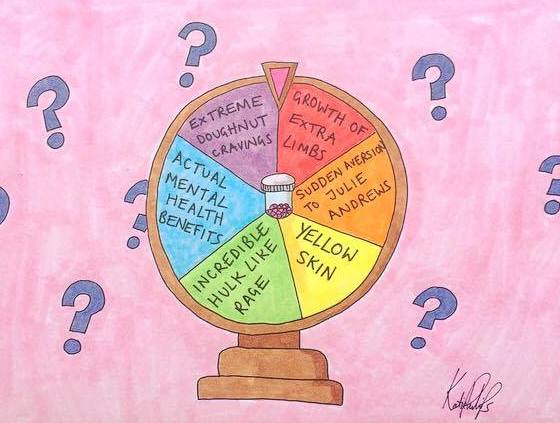