Have you ever played real life Where’s Wally but instead of a man in a bobble hat and a striped jumper you had to find someone with depression? Hopefully you answered no, (if you answered yes I would advise you to make some changes to games you play for recreational purposes and would suggest Scrabble as an alternative). If you did answer no though, it is a game I do not recommend because playing such a game would be practically impossible (again, maybe try Scrabble).

Despite the fact that we now live in a time where there is a fairly wide understanding that depression is a “mental” illness, I still feel like there is the idea that somehow it is as visible as a broken leg. In fact I have lost count of the number of times someone has discovered I have depression before responding in surprise with that oh so familiar phrase to anyone with depression, “but you don’t look depressed”.
To be fair, no, no I often don’t. Then again Ralph Fiennes didn’t look like Ralph Fiennes when he was playing Lord Voldemort in the Harry Potter films with his nose all squished out of recognition, but underneath all that make up/genuine wizardry, he was still Ralph Fiennes.
Much like Ralph Fiennes, people with mental health problems like depression are often great actors, dare I say even better than the ones you see on TV to be honest, as we don’t even need green screen or CGI fake noses.

Whenever people say that I “don’t look depressed” I almost want to ask what exactly someone who has depression should look like considering I am clearly not living up to their expectations.
I think the traditional depressed person is supposed to look like the pictures you see when you search depression on google images or look at any of the pamphlets they hand out at doctors’ surgeries. In the majority of these images, the people are curled up in a corner somewhere with their heads in their hands, but like the images you see of skeletal anorexics in the media, this is not always the case, and it is dangerous to think so.
Admittedly sometimes in my life living with depression, there is a lot of curling up in a ball for a good cry (often with Celine Dion – “All By Myself” playing in the background), yet that is not my constant state of being and not something I allow many people to see.
Inside I may feel like staying in that soggy ball all the time, but at family occasions or social events for example, I always put on my “sane” face and play the part of “human who has life together” as required by expectations upon me, much like many other people do at work or when they are in front of their children.

Contrary to portrayals in the media, often both I and other sufferers of depression really do just look like “normal people”. However well disguised a depression suffer is though, it doesn’t mean they are any less ill or need be taken any less seriously than those who are visibly struggling. Indeed, what a person looks like on the outside will tell you nothing of the severity of their condition, and you cannot compare sufferers based on the number of tears they have cried in the last fortnight.
Depression may be one illness, yet it expresses itself and feels different to every individual who suffers from it, so how one depressed person behaves could be totally different to someone else who also has the condition.
Even single individuals can present the illness in totally different ways depending on what day you come into contact with them so you can’t even classify people in groups of “loud person with depression” or “quiet person with depression”.
Like I said there are some days where my depression means that I physically cannot talk or get out of bed, and then aside from the days I have to pretend to be a certain way in front of family members, I have days at home in private where I am so depressed that I spontaneously burst out into hysterical laughter despite being alone and “allowed” to show how I really feel without upsetting anyone. It is almost like those situations in which people without depression hear a piece of bad news and instead of reacting with tears as would be appropriate, they just start laughing because their brain physically cannot cope with the shock/that amount of sadness. Truthfully I have had days where I can be so depressed that I spent half an hour hysterically guffawing (I believe the kids today call it “LMAOing”/“Loling”) at a pencil. Yes, you read that right, I laughed for half an hour at a pencil (not even a particularly funny pencil. His jokes were terrible. No idea of timing when it came to landing a punchline).

Much like the problem I discussed in my post about people with eating disorders not always being underweight, this misconception that someone must “look depressed” to be depressed is actually a mistake that puts many people at risk as well as being frustrating.
It is often due to this “depressed people must look depressed” problem that sufferers may feel unable to “come out” and be honest with family members about their issues for fear that they won’t believe them or take them seriously. Admitting to someone that you have depression is hard, often embarrassing and can take a lot of courage as it is, but to do so and then be told that you must be mistaken because “you don’t look depressed” is a sure fire way to make someone feel more devalued, ashamed and deluded than ever.
It is when people feel the need to keep their illnesses quiet and not seek help for fear of this response that they end up feeling more alone than they already did and in some circumstances take their own lives. How many articles about a suicide victim have you read where the family conclude by saying “we knew this would happen. Too much crying/head holding in the corner”? Most likely none, as usually such columns end with the far more unfortunate “we had absolutely no idea”.

When it comes to those with depression, in this post I really want to urge people to see them/us, not as head clutching Celine Dion fans, but instead as ninjas, masters of disguise who can pop up anywhere without people realising (only without the resulting violence that often ensues around ninjas).
That jolly person who served you in the supermarket? They could have had depression. That milkman that never shows any emotion at all? They could have depression. That girl you saw cycle past your house this morning? They could be a penguin in disguise, which isn’t exactly the same as depression but it just goes to show that you cannot make any judgements based on appearance alone.
Literally the only way it would ever be possible to play Where’s Wally where the aim is to spot the person with depression would be to make every sufferer of the aforementioned condition wear a Where’s Wally jumper at all times, and thankfully, that is never going to happen… At least I hope it doesn’t… I really don’t suit horizontal stripes. 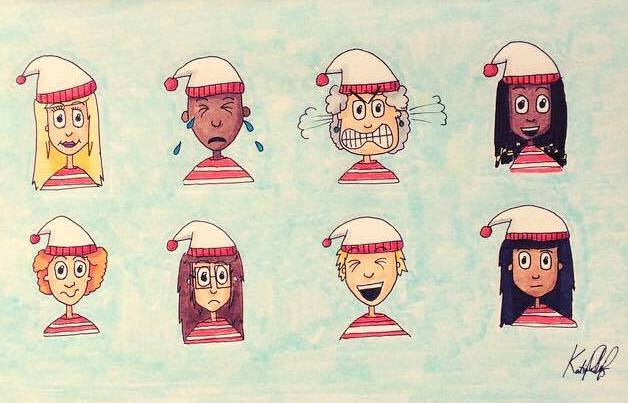 7 thoughts on ““But You Don’t Look Depressed””