If you live in England it is likely you are a viewer of, (or are at least aware of), The Great British bake off, a show otherwise known as “The Greatest Program on Television ever”. Seriously, if you don’t watch it you really should give it a go…That is unless you have an allergic reaction to the phrase “soggy bottom” or deep seated hatred of collections of people baking in tents and having their creations critiqued by a bearded man who likes to squash bread into balls and then complain about the consistency of the bread he has just mashed back into a dough…If that is the case maybe give the bake off a miss…
Luckily, none of those things bother me, so I am able to enjoy the bake off in all of its pun filled, icing topped glory. However, every time the annual bake off rolls around, it always reminds me of a certain symptom common to many people with food related mental health problems. The symptom? Many people with eating disorders are obsessed with baking.

Obviously not everyone who has an eating disorder bakes and not everyone who bakes has an eating disorder (if they did Mary Berry would be in need of some treatment immediately). On the whole though, it is a very common problem that many people are unaware of, and that rarely comes up or gets talked about other than by the people whom it affects. To some of you out there, it may sound a bit ridiculous to write a post about the issue that is eating disorder patients finding any excuse to whip out a spatula. After all what is the problem with a bunch of anorexics liking to bake a few sponges now and again? Why worry when someone with bulimia gets out a wooden spoon and starts sieving flour with eyes squinted in concentration? Why complain about someone bringing fresh homemade cookies into work purely because the baker has been diagnosed with EDNOS? Well, the problem is that often people with eating disorders who are obsessed with baking, are obsessed in a very unhealthy way that can be detrimental in recovery and serve the eating disorder rather than the baker.
Seriously, it is such a common and big issue that many of my disordered friends and indeed I myself, have been placed on multiple “baking bans” by mental health services during treatment for anorexia, an experience much like being a smoker on a smoking ban, only I was rocking back and forth cradling a wooden spoon rather than a packet of tobacco.

Like I said, not everyone who bakes has this problem and the problem isn’t within baking itself. Baking is awesome, and there is nothing like the satisfaction you get from people admiring your perfectly risen soufflé, but the issues arise and things get disordered when the baker dedicates an unusual amount of time to their pursuit, yet refuses to try even a lick of icing from the bakes they produce themselves.

For people who haven’t experienced an eating disorder, this probably doesn’t make much sense. Why would someone with a difficult relationship with food surround themselves and actively go about creating the culinary masterpieces that they themselves fear to sample?
Well, as always I can’t speak for everyone suffering from a mental health problem. Though similar on the surface, we are still all so varied inside (much like how chocolate chip cookies and raisin cookies look alike but are actually completely different). Nevertheless, I thought I would at least try to explain here why I personally love to bake, in the hopes that maybe I will provide an explanation and speak for a few others out there.

When I bake, it isn’t just about taking part in a little hobby to pass the time, it is about serving a purpose in terms of my anorexia.
Don’t get me wrong, by involving food it is still a scary activity (for example I often worry about touching fatty ingredients for fear the fat will sink into my skin or I worry that the smell of a cake has calories in it), but overall baking is an outlet, a thing I can do with food that other people can do, and most importantly, a way I can take part in the cultural aspect of food.

Normally in my life with anorexia, when it comes to food/events related to food, I see myself on the outside of things. Whenever someone has a birthday cake, a dinner party or hands round a box of chocolates at Christmas, I watch it all play out like an observer. In the room but not really involved, almost like I am in a theatre watching a scene being played out on stage whilst I am firmly seated in the audience. For over a decade I haven’t been able to join in with many food related things. I haven’t shared a pizza or bucket of popcorn with a friend, I haven’t accepted a bourbon offered over a cup of tea or indeed eaten something at a meal table that was the same as other people eating around me.
Baking then, serves as a way I can get a bit more involved in all of those things, only without the terror I would associate with joining in like a “normal” person.

When I bake a cake it is as if I can stand on the stage with everyone else rather than having to stay firmly seated in the audience, watching from afar through my little pair of binoculars (this may be an analogy but I am unable to afford good theatre seats.)
Instead, I can bring out the cake for the characters to start eating in the next scene, I have a role, a part to play in the action, I am not merely an observer but up there in the spotlight as “The bringer of cake”.
If people talk about food I haven’t tried or made I cannot join in. When people comment on something I have made however, I am involved. They can ask questions about what is in the bake and I will know the answers. Okay I may not have eaten the food myself, but in creating it, I can relate to it in a way that sounds as educated and informed as if I had. If people comment “oooh is there vanilla in this?”, I don’t have to just stand there staring at the confection trying to spot a pod of vanilla, or turning to other people to see if they can taste vanilla too, I can answer for myself that there is indeed vanilla in the cake, and for one second I can actually feel like a human being, part of something “normal”, joining in.
That is why I love baking despite having an eating disorder that prevents me from tasting any of my creations myself, and perhaps that is why a lot of other people with eating disorders like baking too.

In writing this my aims are not to encourage any disordered bakers out there to pack up the pastry or to tell carers of the mentally ill to confiscate their whisks.
If you enjoy baking and it makes you happy, do it more often, but still I have written this because I think it is important to question yourself if you are one of those bakers who would never consider having a nibble on their own Battenberg, and important for people to be aware of the fact that in some cases, a baking obsession can be a symptom of an eating disorder. If you as a reader ever feel compelled to get busy in the kitchen, my only hope is that you bake your cake and eat it too. Sure it may be nice just to partake in the creative process, to play the role of “the bringer of cake” in scenes you would otherwise watch from the wings, but the experience is a hell of a lot sweeter when you are actually able to fully join in with the eating part and share a Victoria sponge with friends. It is scary, but as a Bake Off challenge I would encourage you all to give it a go, and, if ever in doubt, just ask yourself: What would Mary Berry do?
(Answer: she would eat it, and as a British national treasure you should really follow her example). 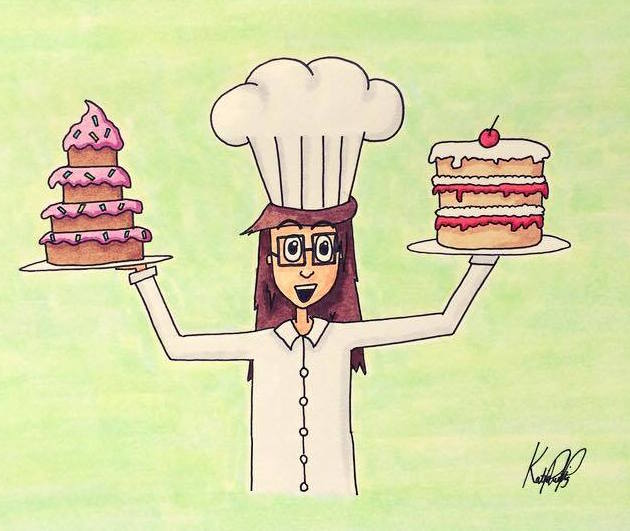 2 thoughts on “The Great Eating Disorder Bake Off”