Before reading this post please note that it involves trying to explain what being suicidal feels like, so if there is ANY risk of that triggering you in any way please click away now.

Suicide is a difficult topic to talk about because there are so many feelings that go alongside it. For some it can be immoral, too upsetting, something “selfish” people do, too sensitive, too dark, maybe even something that people avoid talking about because it is too difficult to understand why someone would commit such an act. For all of these valid and understandable reasons, suicide is not often talked about, it is a bit of a taboo, especially for people who find themselves plagued by suicidal thoughts on a daily basis.
To say you feel suicidal sounds melodramatic and “actually mad”, so I feel that a lot of people who feel that way keep quiet because they either don’t want the judgement/stigma that comes with honesty, or because they don’t want to be thought of as “crazy” and locked up in some imagined padded cell with a straitjacket and men in white coats. However I think that if more people were honest and able to openly talk about suicidal thoughts without any stigma, maybe more people would come forward to discuss how they feel, which could then save lives. Before this can happen though, I think more people need to understand what people mean when they say they are suicidal, rather than jumping to the conclusion that the person is insane and simply wants to die.

As it happens, or at least in my case, when I have suicidal thoughts/ideations/damn annoying brain intrusions that I wish would kindly leave immediately (that is the official medical term), it is nothing about wanting to die. Obviously I cannot speak for everyone who has ever thought about suicide, but from people I have spoken to, I have found a common ground in that a fair amount don’t exactly want anything. For many, suicide is actually more about not wanting something.

Imagine being on one of those step machines in the gym. I don’t know what they are called, but I am talking about the thing that is kind of like a treadmill but with steps instead of flat space, so you can effectively walk up a constant stream of stairs without actually going anywhere (what a productive way to spend your time!).
Imagine you have been on that same step machine for hours, constantly walking up stairs that take you nowhere. Understandably, after several hours you will be exhausted, fed up, in physical pain and unsure as to whether you can continue. There is however no off button on this machine (a severe design flaw), and you cannot get off it without falling into a giant tank of hungry sharks, poisonous jellyfish and squid with tentacles poised to strangle you the moment you hit the water (please note this is not often the case when it comes to machines in your local gym, but for the sake of example just humour me).
You don’t want to keep walking, but you certainly don’t want to fall into the lagoon of doom, so you force yourself to persevere in the hopes that if you keep pushing, eventually the machine will stop and you will be free. A week passes. The machine is still going, you are in agony, yet you persist. 9 months pass. You have been walking up these seemingly pointless stairs for as long as it take for a human to be created and born and you are in pain that cannot be described. You are worn out, spent of all your best efforts, and are the walking definition of “at the end of one’s tether”. You then look down and find yourself contemplating the only way you can see out of the situation, the lagoon of doo

m which is no less terrifying than the first day you found yourself on this godforsaken machine. Obviously you do not want to jump into the water, (you can’t swim and have a severe phobia of marine life), but after 9 months on this damn machine, the sharks and jellyfish look like the only/best option. When thinking about whether or not to jump, you are not thinking about what you want to do, you are thinking about getting away from the pain coursing through your body
, opting for the lesser of two evils, even if the evil hovering below you is a giant furious squid with a monocle (the squid isn’t actually wearing a monocle but this post is getting a bit heavy and I am trying to lighten the mood. I want this post to inform not drag readers into a bottomless depression).

To me, that is what feeling suicidal feels like, it isn’t a case of wanting to die, it is a case of
not feeling able to carry on. That said, the analogy is not perfect and I AM NOT SAYING THAT SOMETIMES SUICIDE IS THE ONLY OPTION. My explanation is HOW IT FEELS to be suicidal as opposed to the reality.

If the person reading this is well aware of the pain of suicidal thoughts, I want you to know that the reality of the situation is very different. Little do you know that whilst you are on that machine, helicopters and cranes are on the way to rescue you, the machine is going to run out of electricity, you are not going to be walking in that pain forever and there is always a way out or an escape even if you can’t see it. Things don’t stay the same forever, even the Spice Girls broke up eventually and we all thought that was a bond that would never be broken. Machines and depression or suicidal thoughts cannot survive into infinity and whilst you fight your way through I can guarantee there are a million people out there who want nothing more than to help you off that machine. It may not be today or tomorrow but some day a giant bird is going to appear with a rescue team on its back and you are going to have a way out that doesn’t involve the lagoon of doom or actual suicide. The important thing, is that you are alive to see that day, and hopefully ride off on that giant bird/life without these thoughts, that when on the stepper you never thought was possible.
If you can relate to this post in any way, please know that I am marching up those seemingly endless stairs alongside you, not knowing what to do but just hoping that one day that bird is going to come and all of this pain will be a distant memory.
This post is to explain how it FEELS to be suicidal to people who may not understand, but if you do understand please know that the feelings are not reality. They can’t be. Squid don’t even wear monocles.

Seriously though, If you are struggling with suicidal thoughts please tell someone right away, whether that be a friend, stranger on a helpline (you can call Samaritans on 116 123) or even go to A&E. Just don’t be afraid of talking about it, because staying silent is ultimately a hell of a lot more dangerous. 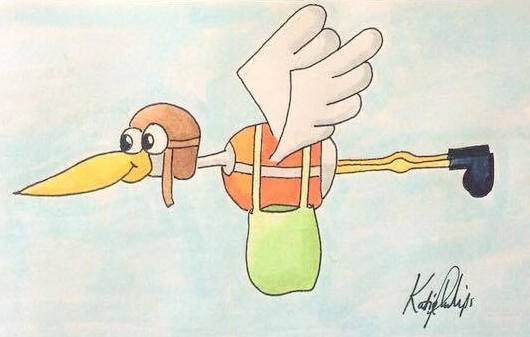