I first became vegan in 2012, and at that time I didn’t know anyone else who was a vegan. From my viewpoint, they were pretty rare and sparse, much like some herbivorous creature David Attenborough would have to spend weeks stalking before he could actually get one on film. Recently however, I seem to be seeing a lot of vegans springing up all over the place. As a vegan myself, obviously I think this is great, as it strengthens a movement and cause that I agree with and am passionate about, but the concerning thing is that a lot of people I have seen suddenly start milking almonds are people in the eating disorder community (both online and in real life).
Obviously “veganism” and “anorexia” are two very different things, one is an ethical movement, the other a mental illness, so naturally being vegan does not mean that someone has an eating disorder, just as someone having an eating disorder doesn’t mean they are vegan. Nevertheless there can unfortunately be times when they cross over, and the lines between the two normally very separate labels become a bit blurred, much like the colours of a carrot and a stalk of broccoli do when you put them in a blender and switch it on high speed. It is here that the problems start, problems people need to be more aware of and open to discussing, as it is here people can start using veganism as a mask to cover what is really an eating disorder, a dangerous trick that can leave many people unaware that they have a problem or mean that others do not pick up on what is a potentially fatal illness.
In other words it is hard to work out which bit is broccoli and which bit is carrot, so I feel it is important for people with eating disorders who are vegan to question their lifestyle decision, not because it is wrong, but to make sure it is for the right reasons. Therefore in order to try and help people who are unsure about either themselves or a friends dietary choices, below I am going to list several things to look out for as signs that your veganism is actually something a lot more dangerous…

1. Why are you vegan? What was the initial cause or reason and how did you come to the decision? – When you or your friend became vegan, what was the drive behind it? Was it to benefit the environment? To fight animal cruelty? Or was it to use as an excuse to mask why you are taking things out of your diet? With eating disorders, veganism can sometimes unfortunately be used as a get out of jail free card. If you start refusing all standard cakes or ice cream, family may be concerned or question whether or not there is a problem. Wave the vegan flag however, and you have given yourself a more socially acceptable disguise for your refusal, as I think we can all agree that “I am not eating that because I am vegan” tends to go down a lot better than “I am not eating that because I have an eating disorder that is slowly killing me”.

2. Restriction or alternatives? – An important thing to bare in mind when considering someone’s veganism is how they go about it. For example, veganism is NOT about cutting things out, it is about swapping them. Used to get protein from meat and eggs? You can swap that for chickpeas and beans. Had your fat requirements from full fat dairy? Introduce yourself to Mr avocado and his civil partner Señor peanut butter. Veganism is about still getting all of your daily needs but from plant based sources, it is not about emptying all the cupboards and then living off a bag of lettuce.

3. The “Imagine you accidentally” game – Imagine you (as a vegan), ate something that was not vegan by complete accident and without having any way of knowing about the non-veganness before hand. What do you think? Is it all “oh my God I just ate something with cream in it I am going to get fat! My thighs will be wider than the widest wide thing in the Museum of very wide things”, or is it more along the lines of “Oh Damn! That is annoying, I feel guilty about the animals but I guess it was human error, not my fault and I will just have to check ingredients more thoroughly from now on”?

4. How has veganism impacted your lifestyle overall? – Obviously being vegan involves dietary changes, but changes are not limited to food alone. By deciding not to contribute to the exploitation of animals, you are deciding not to use animals for your own gain, not just deciding to avoid eating them and their produce. For example when I became vegan, my entire make up collection, shampoos, shower gels and toothpaste all changed to animal friendly versions. If the only aspect of veganism you care about is the food side of it then maybe examine why this is, to make sure it isn’t because the food changes are actually about something other than animal ethics. After all it makes little sense to avoid eating a cow whilst wearing a leather jacket, so finding out and questioning your stance and opinions on the non food related parts of veganism can be handy in giving you a clue as to where your head is at.

5. The Vegan bakery test – Imagine a friend wants to support your decision to be vegan and takes you to a vegan bakery. There are vegan brownies, cakes, muffins, the lot. When you look at the display what do you think? Is it a case of “Oh no my excuse to get out of cake is gone! What do I do? I must reach behind the counter, grab a wooden spoon and whack my friend on the head to distract them whilst I run away”, or is it more similar to “Oh my goodness I want that chocolate peanut butter muffin in my face immediately”. This test is a fairly good guide in my opinion as to how much your veganism is impacted by possible animal or disordered eating factors. It is also a good test as a guide to find out how much you like your friends, because if you are that eager to hit them in the face with a wooden spoon you may want to consider socialising with other people.

In an ideal world obviously I would love for everyone to be vegan, so I don’t want this post to be seen as telling people with eating disorders to run off and bite the nearest sheep immediately.
What I am saying is that if you are vegan or have a friend who has recently turned vegan, be sure to question it (especially if they have a history of eating disorders), and be fully aware of why that choice has been made. In my opinion a vegan diet is one of the healthiest diets around, so if you have an eating disorder and your veganism is a separate entity to it, then go ahead and carry on loving your lentils. Hell, have a shower in chickpeas and build a house out of a giant cabbage, just be sure to distinguish whether or not you are dealing with real veganism or a potentially fatal eating disorder wearing a vegan mask. After all, no cow is going to be particularly grateful that you stopped drinking its milk because of a voice in your head that is trying to kill you.

Stay safe all vegans and non vegans and people reading this in general. Cheerio for now. 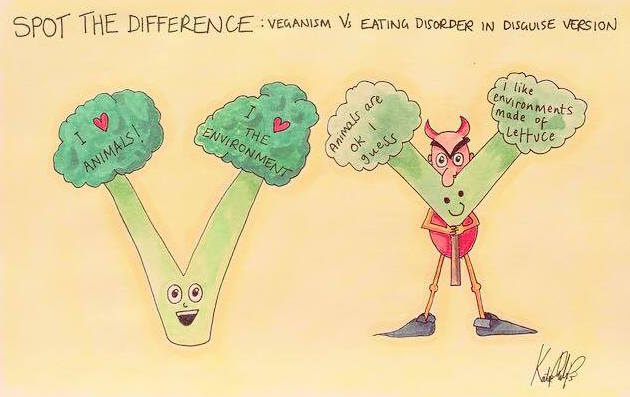 11 thoughts on “Veganism Vs Eating Disorders”