Every time my parents pick me up from a psychiatric appointment, they ask me the same questions:

They are only trying to be nice and just want to understand more about what is going on with the crazy person living in their house, but I often wonder what exactly my parents expect me to answer when they ask me these kind of questions.
What did they do to me? Well first I was strapped to a table and then they hit me on the head with a mallet to smash the crazy out. What are they doing about the anorexia/OCD/depression? They are cornering it with a sleuth of angry bears (that is actually what a group of bears is called, “a sleuth”, trust me I looked it up on google), so that it runs off of a cliff into a flange of angry baboons (I may or may not have just discovered a website that tells you what the collective names for various kinds of animals hence the uses of ‘sleuth’ and ‘flange” in this post).

The truth is, the psychologists and psychiatrists and support workers I see don’t “do” anything, but at the same time that does not mean they don’t do anything. Sometimes I may do pieces of “work” or try courses of various therapies, discuss changing my medication or upping the dose, but on the whole the majority of my appointments are taken up by simply talking about things. If I say that to my parents, they worry that because nothing is being “done”, I am not receiving any treatment, but what many people don’t realise is that simply talking as a treatment, is seriously underrated.

By telling someone how you feel, you can release some of the emotions you are bottling up; by explaining a problem you are having to someone who doesn’t understand, you may understand things that even you didn’t know you were feeling; and by sharing a secret or a burden/pain, you share the weight of it and are allowed a little brain space to breathe. Like they say, “a problem shared is a problem halved”, not that I know who they are but they seem pretty smart to me. I know it all sounds very wishy washy, which is probably why the idea of “just talking” is sometimes not viewed as “treatment”, but mental health issues are far more complex and confusing than people can really comprehend, and you only learn about them through exploring. I have been in treatment for over a decade yet still I often realise things about my illnesses and my relationship to them that I didn’t know before, just by talking things through.

I suppose the message I want to get across in this post is that when it comes to recovery from mental health problems, it isn’t straight forward, there isn’t a set thing to “do” or fixed course you follow. As cheesy as it sounds, recovery really is a journey of self exploration, and everyone/everyone’s journey is different. People are individual and unique, so their experiences of their illnesses are individual and unique, different and relative to them alone, so “just” talking about things is really important. Only when you really understand what is going on with you and how your life is affected personally, can you really tackle the problem. If you are just starting to receive therapy or are supporting a loved one in therapy and are worried that nothing is really “happening”, please do not feel despair. It may not feel like it, but things really are being “done” and you are working towards recovery even if you don’t realise it right now. Words are power. Use them.

Just going to end this post here by letting you know that a group of is caterpillars is called an army. How hilarious is that? The answer is very. Caterpillars are literally the most non-threatening looking animals in the history of the world, yet still if a lot of them came into your house you would have to say that you had been invaded by an army. Now if you don’t mind, I am off to gather my own caterpillar army to help in my quest to destroy mental health stigma. Cheers. 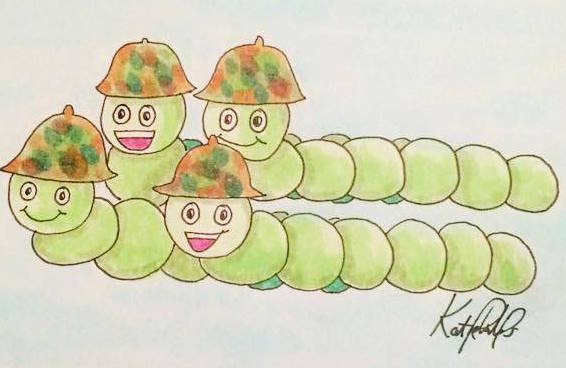 6 thoughts on “What are they doing about the fact that you are insane?”