You know that feeling where you don’t see a friend for a year (maybe they were backpacking around Australia or herding elephants in Africa), and then they come back for a cup of tea asking how things are going and you just sigh because there is so much to catch up on? Yeah. That exact feeling is the one I have today, only in this situation it isn’t that I haven’t written on my blog/spoken to you for a year (heaven forfend!). In actuality it has been a mere week since you last heard from me but what a week it has been and good lord with cheese and chopsticks do I have a lot to catch you up on!

Now, you remember last week when I talked about how I was about to go home after a five and a half month inpatient stay at my local eating disorders unit? Remember how I harped on about all the rules and regulations I had set in place to keep myself and my mental health problems on track and the importance of rules when living with mental health problems? Remember all that stuff I said about how I felt pressured to stick to the rules because if I didn’t there would be consequences including, but not limited, to my parents not being able to cope with me in the family home any more? (If none of this is ringing any bells I suggest you read the two posts that can be found, like aeroplane fire exits, here: The Pressure To “Get Better” When You Are Struggling With Mental Health Problems and here: Why Boundaries Are Important When Living With Mental Health Problems).
Good. We all up to date because you know that situation? Yeah, that situation has kind of sort of exploded all over the place and I have only been out of hospital for a week…

Indeed I can barely believe myself that it has only been such a short amount of time because so many things have changed. Like I said, I was only discharged last Tuesday, armed and determined with my rules and boundaries set my my parents to help keep my mental illnesses in check back home, but in this past week, all of those rules have gone horribly wrong.
From that first day back home my eating disorder looked at all of those neatly written out rules and laughed and I was smacked in the face by how much harder all of this eating malarky was going to be outside of hospital.
To be perfectly honest I do not understand it even myself.
For five and a half months I have been following a meal plan and now a simple change in location has completely thrown me off. I am not saying that I admit defeat already, far from it, but I can acknowledge that there is a serious problem and am well aware that, no matter how positive I try to be or how determined I am, I am currently unable to stick to the rules around eating certain amounts at certain times and not self harming that have been set.

“What is wrong with that?” I hear you ask “So you are breaking a few rules. This isn’t school, what are you worried about, getting detention or something?” I hear you cry!
Well no actually, I am not fearing detention but I have been fearing the consequences of me not being able to stay in the family home and in this past week it has come to my attention that me staying in the family home and living by my parents’ rules is, at this point impossible.

Now before I go on I would like to make it clear that my parents are not evil (well my mum is a little bit and she does cackle over a cauldron occasionally but that is a story for another day) and just because I am struggling with my mental health at the moment they are not kicking me out of the house. Far from it, they want and are doing all they can to support me with my insanity, hence why they set up these rules so that we could all try to live happily together, but to be blunt, they simply cannot cope with my madness any more for the sake of their own mental health (remember self care is important folks) and so me being unable to follow the rules has led to some consequences. What consequences?

Well, watch out because here comes a bombshell: I am not going to be living at home anymore. Yeah…I told you a lot had happened…

Like I said it was mere hours before we realised that I was not going to be able to live by the required rules and so, knowing that my parents could not cope anymore and that I didn’t want to put them through all of this again, I hopped onto google and started looking for a place to live. Mere days later I had impulsively used up my inheritance on a flat…yeah…I guess you could say things have moved pretty fast.

I don’t even know what to say or where to go from here because I am still so shocked and mind blown as to how all of this is happening and to be honest none of it feels real.

I am moving out.

I am in the process of buying a flat.

I have never lived by myself before and soon I will be living alone. WHAT IS HAPPENING?SOMEBODY STOP THE RIDE! I WANT TO GET OFF!

See what I mean about having a lot to update you on? Seriously, I have gone from living in an insane asylum for almost half a year, part of that time on 1:1 with a tube up my nose, to buying and living in a flat all by myself in the blink of an eye, and if I am honest, I have no idea how I am going to deal with it. Because of OCD and my eating disorder there are a million of normal every day things that I cannot do for myself from changing a duvet cover, to taking out a bin or washing a pair of socks and yet suddenly all of this responsibility is on me. Oh and how many Katies does it take to change a light bulb? THERE IS NO NUMBER HIGH ENOUGH BECAUSE THIS KATIE CANNOT CHANGE A LIGHTBULB. I AM GOING TO BE LIVING IN DARKNESS FOR THE REST OF MY LIFE UNLESS I GET SOME CANDLES WHICH I WILL PROBABLY DROP AND END UP BURNING THE WHOLE PLACE DOWN. I WON’T EVEN BE ABLE TO PUT THE FIRE OUT WITH WATER BECAUSE APPARENTLY FOR WATER YOU HAVE TO PAY A WATER BILL AND I HAVE NO IDEA HOW TO DO THAT EITHER. SOMEBODY HELP ME FOR THE LOVE OF GOD.

So yeah…that is my update, THAT is the latest Born Without Marbles news and an example of just one of the dramatic changes of plan that can occur when you are living with mental health problems…
Obviously it will be a while before I actually move out and into my new flat (turns out that buying property is far harder and more complicated than buying cuddly penguins…who knew?), but eventually that is what is going to be happening. In the mean time I will of course be living at home trying to stick by the rules as best I can and trying not to drive my parents completely mad but who knows how that is going to work out? Then again who knows how living by myself is going to work out because the only reason I am leaving home is because I am too insane and the last time I checked insane people weren’t the best at surviving in this world alone. Thankfully, whenever this flat does come through I will only be a five minute walk away from home and obviously my parents are going to support and help me through this more than I am probably giving them credit for, but purple onions and gravy am I terrified and filled with questions. How did this happen? How did my mental illnesses take over my life so much that they have led to me being practically evicted from my family home and forced to live alone where I cannot interfere with other people? How will I cope by myself if I can’t even cope with the support of other people? How on earth is this whole moving out of an intense inpatient setting and into an isolated empty flat going to play out? Well, truth is I have no idea. I guess we will be finding that out over the coming weeks together… 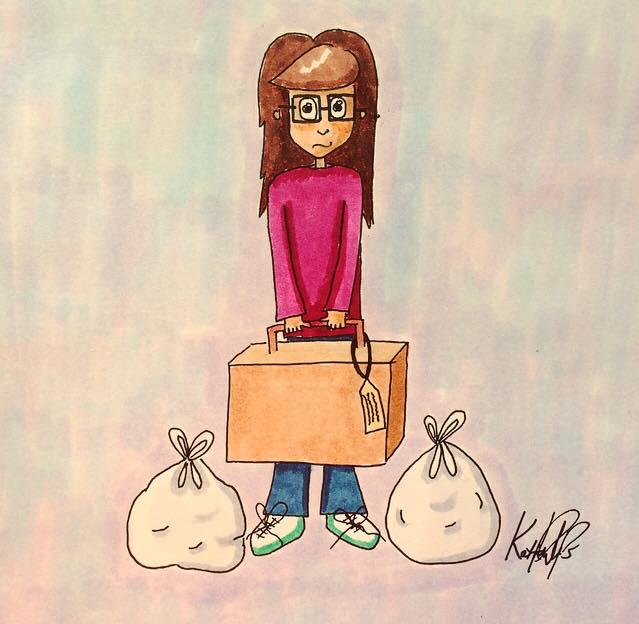